Korean Peninsula: A Pawn On The Geopolitical Chessboard 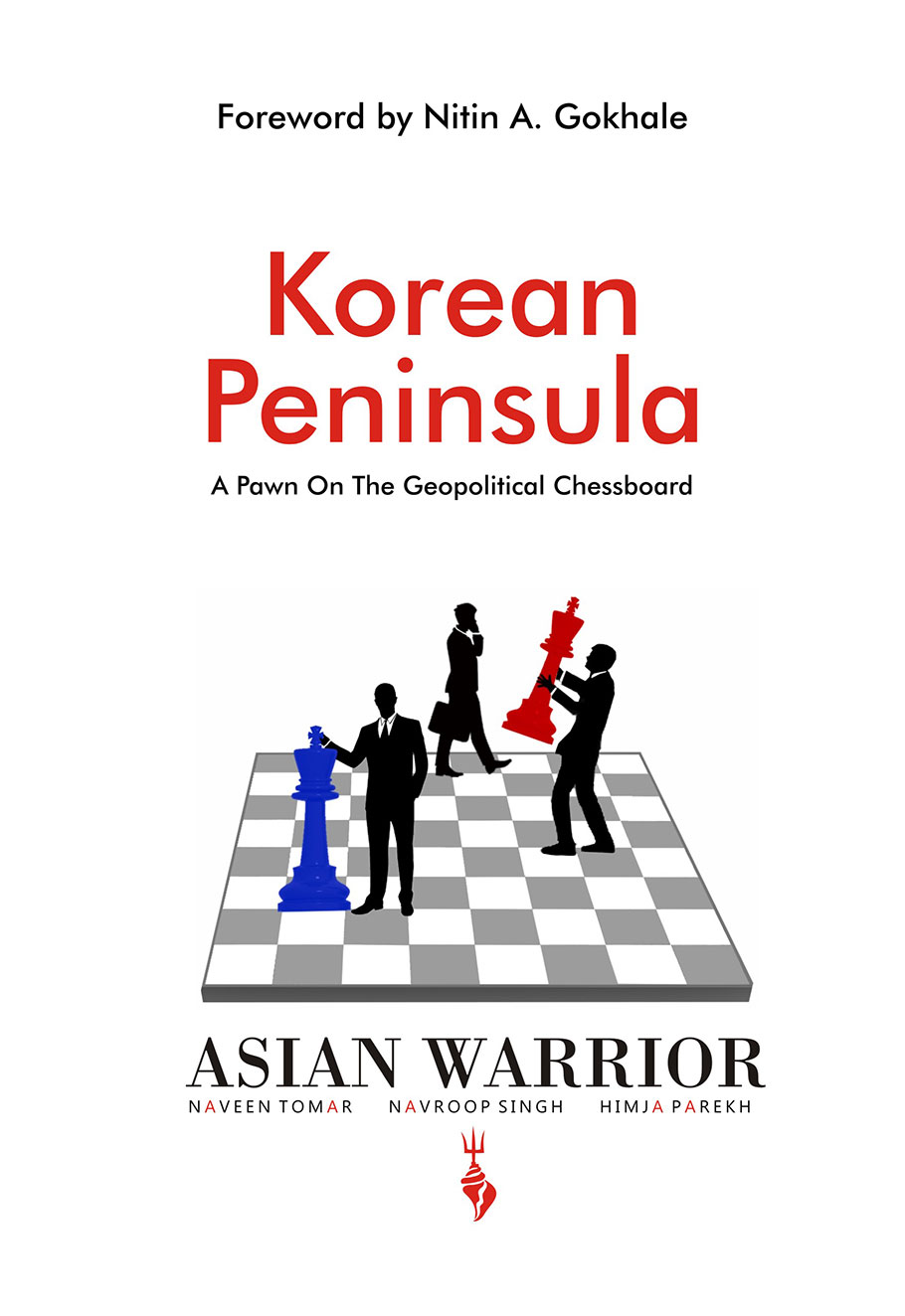 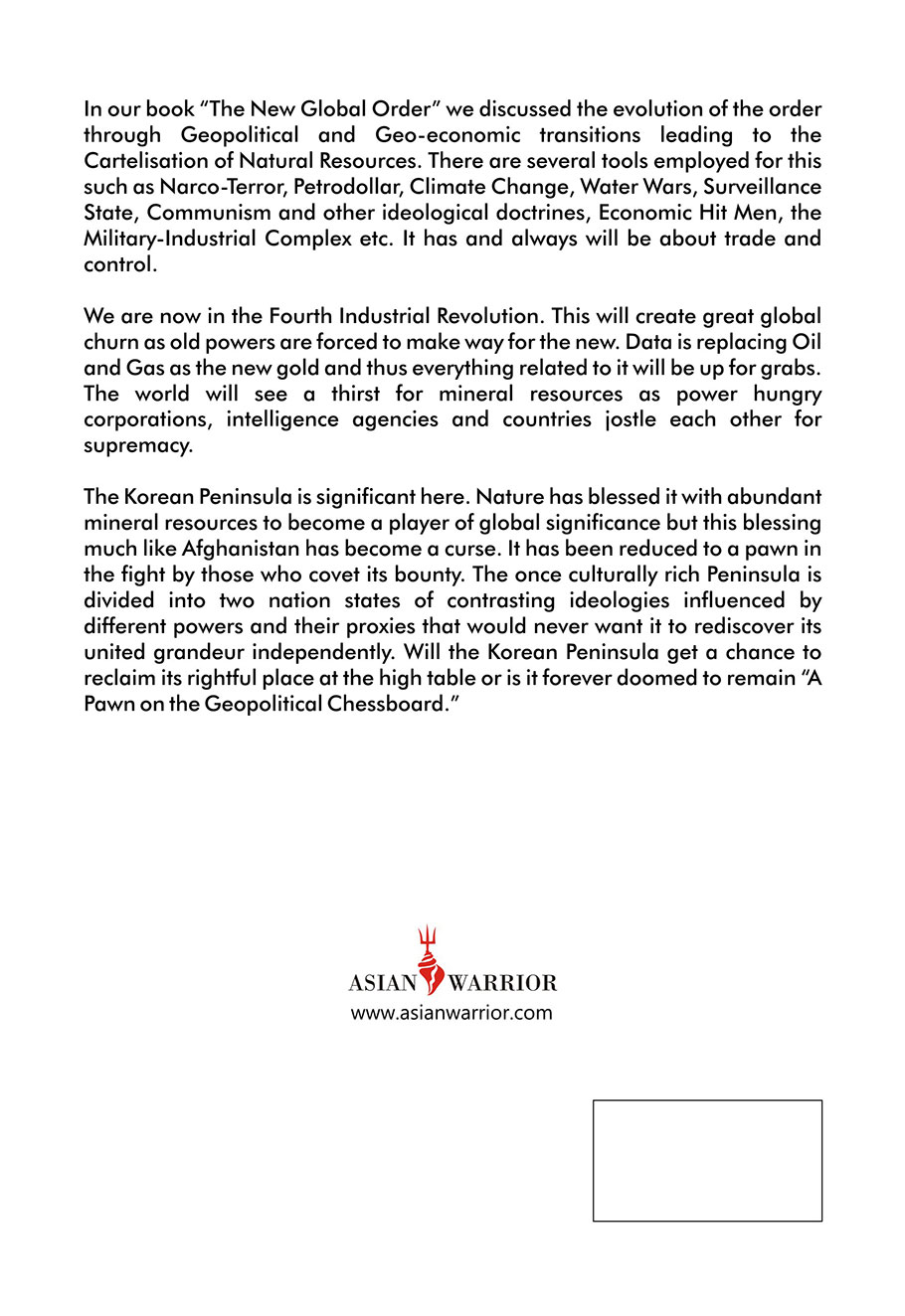 Korean Peninsula, A Pawn on the Geopolitical Chessboard is Asian Warrior’s second book after gaining critical acclaim for The New Global Order. The book authored by Naveen Tomar, Navroop Singh and Himja Parekh focuses on the Korean Peninsula which has been divided between North and South Korea.

The world has always been at war over resources behind the façade of trade, politics, religion and ideology. Though the global order has evolved, the key has always been geography for “he who controls the geography, controls the resources and has the power to dictate both war and peace”. History is testament that whenever new borders are drawn, the seeds for future conflict are sown and the tale of the two Koreas is no different.
Exploring the Korean Peninsula’s Neo-Confucianism ideology, the book shows how this doctrine has impacted the peninsula’s past, present and future. By tracing events on the peninsula from the time of unified Korea under the Joseon Dynasty to the Japanese occupation, World War 2 and current scenarios, the book elaborates how the global powers have used the Korean Peninsula as a platform for their geopolitical agenda to carve out spheres of influence to stay relevant.

The book explores the North Korean mindset along with the evolution of its founding principles and shows its journey as part of the “Axis of Evil” that threatens global security and takes the reader on a journey to understand the role of the different countries and blocs on the Korean Peninsula showing how tangled the peninsula is in the quest for global supremacy. Today North Korea’s nuclear ambitions and its association with rogue nations threaten global peace as North Korea is the only country to have tested nuclear weapons in the 21st century. But that is not the complete story or the reason for the sudden resurgence of the Korean crisis. In the Fourth Industrial Revolution that we are on the brink of, the Korean Peninsula is very significant.

Nature has blessed the Korean Peninsula with abundant mineral resources to become a player of global significance but this blessing much like Afghanistan is also a curse. In the great global churn due to the Fourth Industrial Revolution, old powers will be forced to make way for the new. Data is replacing Oil and Gas as the new gold and thus everything related to it will be up for grabs. The world will see a thirst for different mineral resources as power hungry corporations, intelligence agencies and countries will jostle each other for supremacy. The book also examines the possible hypothesis that could emerge from this global churn.

The Korean Peninsula has been reduced to a pawn in the fight by those who covet its bounty.  The Peninsula’s two nation states of contrasting ideologies that are influenced by different powers and their proxies would never want it to rediscover its united grandeur independently.  Will the Korean Peninsula get a chance to reclaim its rightful place on the map or is it forever doomed to remain “A Pawn on the Geopolitical Chessboard?” 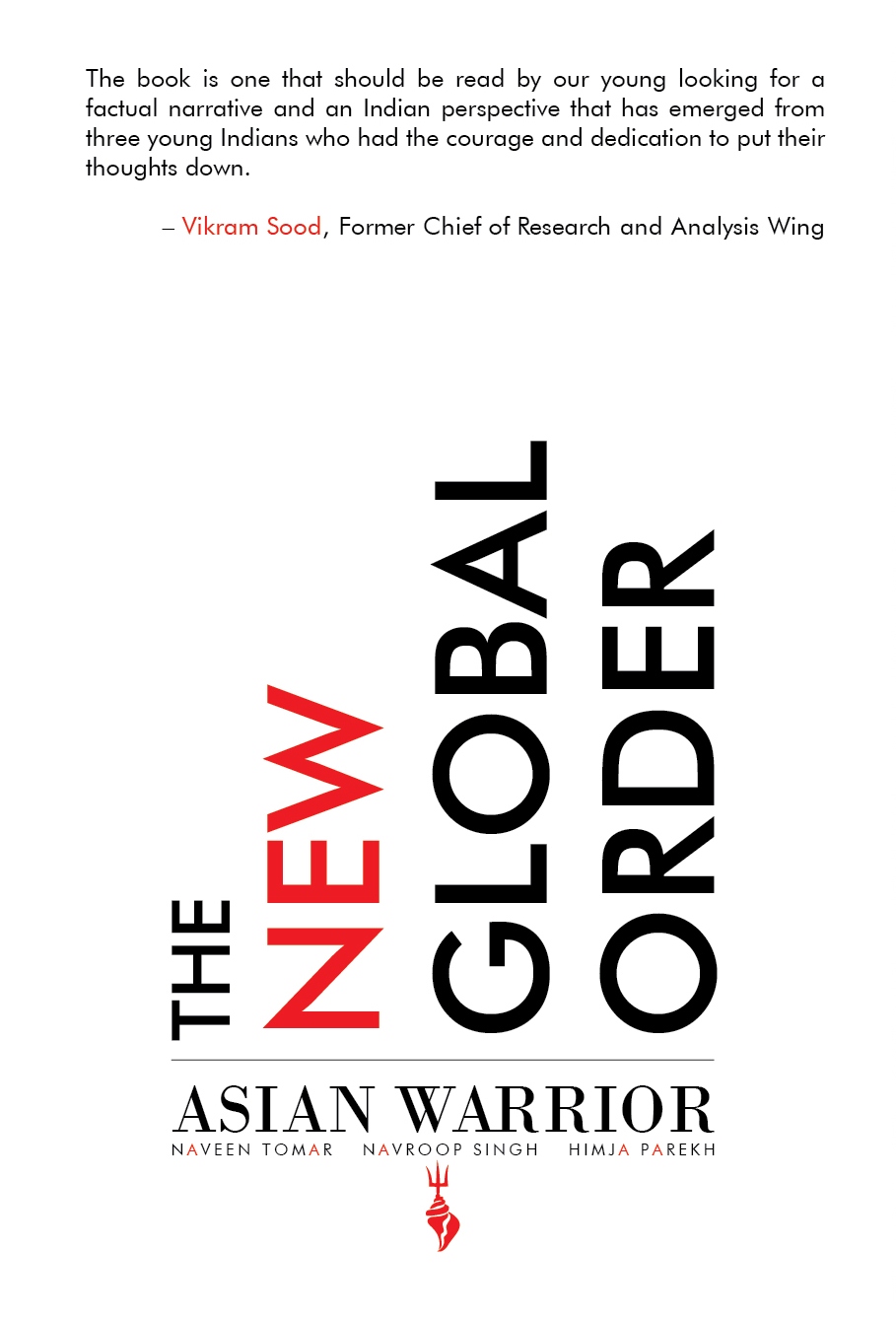 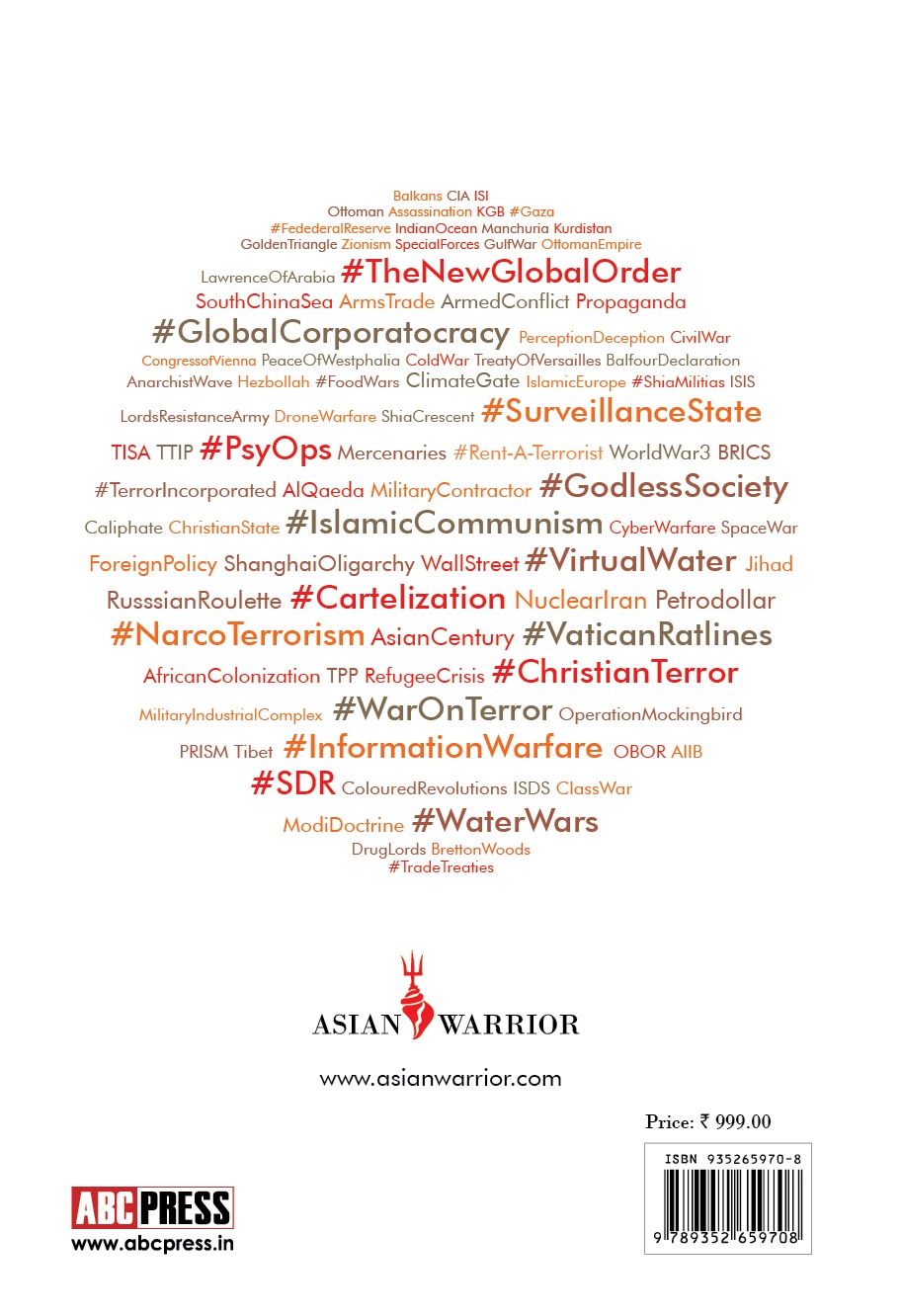 The New Global Order is an endeavour to provide a multidisciplinary angle on the world we live in, to find solutions for a peaceful way forward. History is the witness that every time new borders are drawn, the seeds of future conflict are sown. The book maps the shifts in power over history across the Ottoman Empire, the Russian Empire, France & Germany from the 12th century through World Wars 1 & 2 to the present. It also discusses the way the power shifted from the UK to the US post World War 2 that led to the Cold War, the fall of USSR, the rise of China as well as India’s rise as a counter to China in the times to come.

The book is divided into 6 parts. Part I, set in the Middle East discusses how the seeds of modern day chaos were sown. Part II, dedicated to the War on Terror discusses American imperialism. Part III, Eurasia discusses the dichotomy of Europe, which has the potential to rule the world but has been unable to shed its east vs. west divide. Part IV focuses on the emerging giant China. Part V-India discusses the Indian foreign policy & its evolution, the strategic achievements of India’s new foreign policy & concludes by drawing up the road ahead for it to become an Asian powerhouse. In Part VI, the book discusses the current global order & the contrasts between the Beijing & the Washington Consensus, BRICS & the tools important for the transformation of The New Global Order. They are Narco-Terror, Petrodollar, Climategate, Water Wars, Virtual Water, Surveillance State, Military-Industrial Complex & most importantly, Communism. Communism will gradually erase the sovereign boundaries & lead to The Global Corporate State via the mega trade deals of TPP/TTIP & TISA.

The book also talks about the trends that will serve as the flashpoints of this transition & concludes by taking the reader through the 3 founding pillars of the Global Geopolitical Order, the Global Geoeconomic Order & the Cartelization of Resources.

We are living in times of unprecedented globalisation. Instead of making the world multipolar, history is being repeated as corporates blur the sovereign boundaries and indulge in the cartelization of resources. The world has always been at war over resources behind the façade of trade, politics, religion and ideology. Though the global order has evolved, the key has always been geography for “he who controls the geography, controls the resources and has the power to dictate both war and peace”.

History is testament that whenever new borders are drawn, the seeds for future conflict are sown. Hence while globalisation has brought a high degree of connectivity between polarised countries, communities etc.; the revenge of geography has ensured kingdoms being ground to dust, empires dismantled, democracies overthrown and communist movements created etc.; evolving the global order to where we are today. This theory of territorial reminiscence and its impact on countries, communities and ideologies is at the core of The New Global Order authored by Naveen Tomar, Navroop Singh and Himja Parekh, which attempts a global mapping from the 12th century Ottoman Empire (the key to chaos in Middle East and the world today); 14th century Eurasia through the European and Russian Orders; to China (as the challenger to the United States) and India’s rise in the 20th and 21st century respectively against an order led by Great Britain and currently the United States. As geopolitics is the sum total of state actions that affect the entire world, the book also draws parallels between it and international security.

The book is divided into 6 parts – The Ascendance of Chaos (Middle East), War on Terror (USA), Eurasia, The Rise of The Chinese Dragon, The Indian Subcontinent and the last discussing the tools shaping The New Global Order. The key in shaping The New Global Order lies in creating two contrasting poles and bringing them into conflict. The thirst for power and ego will do the rest. The book explains how these poles were created and analyses the current global order, the contrasts in the emerging Beijing Consensus vs. the Washington Consensus and then discusses the tools of transition. They are Narco-Terror, Petrodollar, Climate Change, Water Wars including Virtual Water, The Surveillance State, The Military-Industrial Complex and Communism. Narco-terror cripples countries, the Petrodollar maintains the US Dollar as the global reserve currency, Climate Change and Water Wars help in carrying out political and economic warfare while The Surveillance State enables PsyOps, propaganda and cyber warfare. The Military-Industrial Complex shapes foreign policy by creating chaos; and the secrets of technology transfer between warring nations to ensure its relevance as a powerbroker are also elaborated. Lastly, the book discusses Communism, the most important tool of the future beyond a form of governance and ideology that will gradually erase the geographical boundaries and lead towards the creation of a Godless Society. The result will be The New Global Order or The Global Corporate State that has already begun via the mega trade deals/economic unions.

The book further explores the trends in this transition by region and also highlights Next Generation Warfare, Islamic Communism, Transnationality of Communist International and the rise of Christian Terror in an emerging bipolar world with new players. It concludes with discussing the evolution of The New Global Order through the three founding pillars of Global Geopolitical Order, Global Geoeconomic Order and Cartelization of Resources. Martin Luther King said, “We are not makers of history, we are made by history”. With the current churning in geopolitics that is shaking the Peace of Westphalia, The New Global Order provides an in-depth view of what lies ahead and how nations can prepare themselves for a world that will be highly globalised yet exclusive.