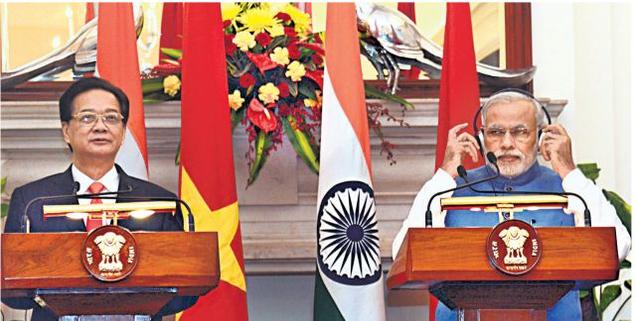 The geopolitics in Asia-Pacific has been moving at a fast pace which is nothing short of a rollercoaster ride. Many events in the recent past have been critical in defining the geopolitical alignments in the Asia-Pacific region. Asia-Pacific is seeing swift movement from the NSG tensions between India and China, the South China Sea verdict by the Hague Tribunal in July 2016 to the signing of Indo-US military agreements like LEMOA in June 2016. However, the most eventful decision and consequential realignment has been that between The Philippines and China due to the current Philippines President Rodrigo Duterte being a harsh critic of the US. The Philippines has been one of the strongest US allies in the region against the Chinese expansionist policies in South China Sea. America not only has military bases and agreements with The Philippines but has even backed it in the international arbitration on South China Sea against China which nullified China’s historical claims of the 9 Dash line. In this backdrop the recent visit by President Duterte to China and his comments of calling off the military alliance with the US and the crackdown on druglords has ruffled many feathers in Washington DC giving China some easy picking with a once staunch US ally. Malaysia is also showing strong signs of tilting towards China by agreeing on military cooperation in the South China Sea. China is Malaysia’s biggest trade partner but the two are at loggerheads over their claims in the South China Sea.  While this is a setback for the United States which saw the UN Verdict on South China Sea as a decisive moment to isolate China in the region, this is also an opportunity for other US allies and states in the region to barter for a better deal with the US as well as other countries to cement a regional alliance.

With the flip-flop of The Philippines with regard to China and the United States, the role that Vietnam plays will be critical in the region. Vietnam is the only country in the region that has singlehandedly humbled the mighty US, Communist China & Imperial France; a fact that still instills nationalist pride in the Vietnamese people. As they say in geopolitics are there are no permanent friends or enemies and recent events in Asia-Pacific only confirm this as the US’s staunch ally Philippines has drifted away towards China while Communist Vietnam is more than willing to engage militarily with an erstwhile enemy i.e. USA. For India, this also presents a great opportunity to cement its role in the region with a strategic partnership with Vietnam, a critical South East Asian country that has historical and cultural ties with it. Countries like India, Vietnam, Indonesia, Japan and Australia could play a pivotal role in curtailing the rise of a Chinese hegemon in the Asia-Pacific region. We have already looked into the Indo-Australian Strategic Partnership in our previous post and will traverse on the India-Vietnam Strategic Partnership and its potential to shape the geopolitics in Asia-Pacific.

India and Vietnam have a very old relationship dating back thousands of years sharing cultural and civilizational ties like many other countries in the region. In the modern era, India’s ties with Vietnam date back to the meeting between Ho Chi Minh and Jawaharlal Nehru in 1927 in the League against Imperialism Conference in Brussels, Belgium. India backed Vietnam throughout its struggle of independence from the French and later advocated for a non-interventionist policy during the resolution of the Indo-China conflict in 1950 at Geneva Conference where it lead the Non-Aligned nations to stave off an American intervention in the Indo-China region of Vietnam. India also backed Vietnam steadfast during the American war of Vietnam in 1970’s drawing much ire from the West for this stand. It is ironical that both India and Vietnam which have historically been opposed to imperial military campaigns in the region are now more than receptive to the American military machine due to the rise of expansionist China seeking to claim territories in the region. While India’s embrace of the United States has increased by leaps and bounds in last decade with military and defence deals, Vietnam has pivoted away only recently and is even a part of the US-led TPP (Trans Pacific Partnership). Vietnam has also recently opened up defence talks with the US post President Obama’s lifting of military sanctions enabling a supply of American military equipment to Vietnam after decades. It is in this context that one needs to carefully ascertain the Indo-Vietnam strategic partnership which could play a critical role in shaping the region.

India has been the cradle of Indus-Saraswati Civilization, one of the oldest in world whose influence was spread far and wide. For more than a thousand years, the Indian Hindu and Buddhist influence spread far and wide into South East Asia and East Asia. The Pali script and Sanskrit language along with Indian epics, literature, texts and practices spread into countries like Vietnam, Indonesia etc with Vishnu Temples and other such historical temples like Angkor Vat that have been found in faraway lands. Kings like Rajendra Chola (of the Chola Empire in South India) and Emperor Ashoka were instrumental in spreading the Indian culture in countries of South East Asia through trade and other means. In the late half of the 2nd century BC, two Indian Buddhist Zen monks known as Mahajavaka and Kalyanacuri came to Vietnam. Kalyanacuri became the head bonze of Dau Pagoda (in Bac Ninh Province) combining his teachings with the indigenous beliefs of Tu Phap (cloud, wind, thunder, lightning) and founded Buddhism in Vietnam. At the start of the 3rd century AD, K’ang-seng-huei, of Sogdiane origin, migrated to India and then to Giao Chau (Vietnam) with his family. He learned the religious scriptures and later became a famous Zen monk. He translated the Astasahashika on the topics of Sunyata and Nagarjuna (the 2nd and 3rd century AD) and developed the famous theory of Madhyamaka. This theory had a large impact on the teachings of Zen as well as Buddhism in Vietnam during the Ly-Tran dynasties (the 12th-13th centuries).

The early exchanges between India and Vietnam took place peacefully through trading on the sea. Lured by the attraction of Suvarnnabhumi and spices in Southeast Asia, many Indian traders sailed with monks on board to offer prayers in the case of natural disasters. Indian culture has spread peacefully to Vietnam through three branches – Zen, Pureland and Tantrism. Thus, peace and friendship are the foundations in Indo-Vietnamese partnerships as well as cultural exchanges. Apart from cultural and historical ties which bind India and Vietnam, India has over the decades also developed a robust relationship in trade and commerce; granting Vietnam  MFN (Most Favoured Nation) status in 1975 and thereafter signed a Bi-lateral trade agreement in 1978. After the economic liberalization of 1991-92, India adopted its Look East Policy focusing more on South East Asian nations like Vietnam, Indonesia, Thailand etc.

India and Vietnam also signed the Bi-lateral Investment Promotion and Protection Agreement (BIPP) on March 8, 1997. These culminated into India signing a strategic partnership agreement with Vietnam in the year 2007 under its Look East Policy expanding the scope of ties from trade and commerce to military and defence along with an emphasis on the cultural bonds between the two countries. During this period the bilateral trade between India and Vietnam has rapidly increased with India becoming the 13th largest exporter to Vietnam. Indian exports to Vietnam have jumped from $11.5 million in 1985-86 to $395.68 million in 2003. Vietnam’s exports to India have also leap frogged in the last decade and half and primarily constitute agricultural products, handicrafts, electronics etc. The rapid pace of growth in the Indian economy as well as Vietnam’s has contributed to bilateral trade surpassing $2 billion by 2008 and crossing $7 billion in 2015. The ties have further expanded in the fields of Information Technology, Education, Direct Air Link and lax visa regimes for better people to people contact between the two countries.

Many Indian companies have established offices in Vietnam and invested in sectors like agriculture, coffee, rubber, cashewnut, carbon black and tea. Indian conglomerates like Tata Steel have also setup steel plants worth $5 billion in Vietnam’s Can Tho province. ESSAR group, another leading Indian conglomerate has also entered into a joint venture with Vietnamese Steel Corp (VSC) and Vietnam General Rubber Corp (GERUCO) to build a hot strip mill plant in Ba Ria-Vung Tau. India’s growing soft power especially in IT and the pharmaceutical sector provides critical avenues for Indian companies to invest in Vietnam. India is also making significant investments in Vietnamese Oil & Gas. India’s OVL (ONGC Videsh Ltd.) and Petro Vietnam have signed an agreement to explore two additional Oil & Gas blocks in South China Sea. They have also signed an agreement for an extension for another project in South China Sea. With the signing of India-ASEAN Trade in Goods Agreement, the bilateral trade between India and Vietnam has increased multifold and the prospective India – ASEAN Free Trade Agreement will further boost trade and commerce with other countries in the region. India must move quickly on this front concluding the India-ASEAN FTA as Vietnam has already become a part of TPP while China is foisting its own trade agreement in form of RCEP.

India has also ratched up its military and defence partnership with Vietnam. The Modi Administration in implementing its strategic vision has transformed India’s policy from Look East to Act East with significant stress on strategic relations with countries in South East Asia like Vietnam, Thailand, Singapore and Japan in Far East. The Act East policy has been well synergized complementing America’s Pivot to Asia with both seeking the underlying objective of curtailing China’s sphere of influence in the region. In view of this strategic push, India has recently opened a credit line of $500 million for defence deals with Vietnam eyeing strategic buys from India like Frigates and Destroyers (to guard its territory in South China Sea) along with Brahmos Cruise Missile (an Indian-Russian JV) that could prove lethal in case of a conflict in high seas or otherwise. Russia is also trying to upgrade its Sukhois with Vietnam highlighting Vietnam’s role in the geopolitics of South China Sea and Asia-Pacific.

The growing embrace of India and Vietnam specially in Oil & Gas sector in South China Sea and arming of the Vietnamese Navy has caused quite a flutter in Beijing which has openly objected to India’s Oil and Gas explorations in the South China sea claiming the area as its own. India has categorically time and again called for the freedom of navigation of seas in the South China Sea. India and Vietnam thus have common interests in the geopolitics of the region amid shared cultural values. With the Philippines flip flop between US and China; and Australia and Indonesia carrying out military exercises; India and Vietnam have a crucial role to play in maintaining the rule based International Order in South China Sea as well as Indian Ocean. Both India and Vietnam need to forge a far deeper strategic partnership encompassing various fields such as trade, energy, military and defence. This partnership is critical for the region of South and South East Asia in face of an expansionist China and growing tussle between China and US in the Asia-Pacific region. This partnership could well decide which way the balance of power tilts in the Asia-Pacific region.