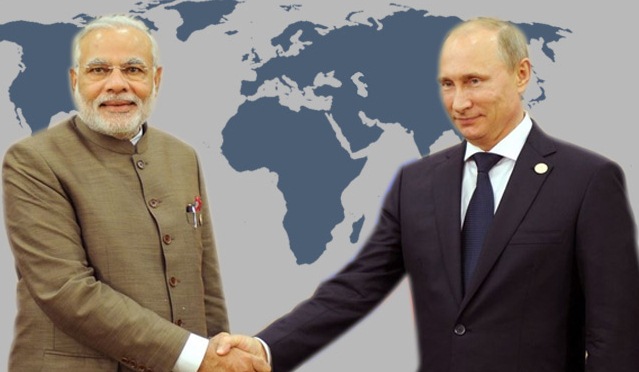 Russia has been India’s principle ally and strategic partner for last few decades dominating the sphere of Indian defence and military acquisitions. The relations between New Delhi & Moscow have been throughout based on real politick and geostrategic interests on the Asian continent. India’s policy of Non-Alignment adopted under PM Nehru continued through decades allowed it to be flexible in converging on various issues with the Soviet Union while distancing itself from communist global order or Comintern envisioned by the Soviet Union. Russian friendship with India has been a time tested one with Russia backing India during the 1971 Bangladesh Liberation war against Pakistan and staving off a Sino-Pak-US axis versus India. The Soviet Union played a critical role in arming India with MiG 21, 27’s making India’s domination of South Asia possible despite Pakistan being a US ally in its anti-communist bloc. The mutual defence treaty between India & Soviet Union in August 1971 played a critical role in giving India a decisive victory in 1971 war. The Soviet Union through geo political moves like tailing American aircraft carrier USS Enterprise in the Bay of Bengal in 1971 war further cemented the Indo-Russian ties which began under the pretext of NAM under PM Nehru.

After the disintegration of the Soviet Union, India embraced a more nuanced and open policy towards the west and more so the United States while continuing to be the prime partner of Russia. Russia through Friendship Treaty signed under Boris Yeltsin in 1993 agreed to supply cryogenic engines to ISRO under a $350 million deal and backed India’s stand on Kashmir issue viz terror emanating from Pakistan. The Friendship Treaty signed in 1993 and the October 2000 declaration of the strategic partnership between PM Vajpayee and President Putin in the backdrop of Kargil War, serve as the foundation of Indo-Russian strategic partnership. While Russia considers Indian sub-continent as India’s domain, India has ably reciprocated to Russia by it acceding it as a global power with its influence ranging from Eastern Europe to Central Asia all the way to the Pacific in the far east. The strategic convergence between Russia & India since the cold war era has been there on many issues like India’s claim on UNSC Seat, NSG and other world governing bodies. Indian & Russian interest also converges on critical issues of terrorism emanating in India’s neighbourhood and the demand for a more paritable global geopolitical and economic order.

While the strategic partnership between India & Russia is on many international issues yet defence as the core sector stands out as the prime pillar of the friendship over last five decades. Russia has been India’s prime arms supplier and defence partner only to be upstaged by the United States over last three years. Despite countries like the US, Israel & France fast climbing the scale in Indian defence acquisitions, Russia still holds the fort with critical weapon systems like Sukhoi SU-30 MKI jets with India, joint ventures for Brahmos Cruise Missile, T-90 Tanks, Admiral Goshkov as INV Vikramaditya Aircraft Carrier. Russia has also extended the co-operation with India in developing Kamov Ka-226 military helicopter with India’s HAL under its flagship Make in India Programme. India has further agreed with Russia to invest $4 billion in the final part of R&D in FGFA (Fifth Generation Fighter Aircraft) project to develop its prototype which after testing could be inducted in the Air Force years ahead. The FGFA is a critical project for India as well as Russia providing the much need cutting-edge stealth technology to Indian Air Force against the Chinese PLAF. India has further agreed to upgrade its Sukhois SU 30s to Super Sukohis with AESA radars and long-range stand off missiles.

While Indo-Russian defence partnership has been broad based one across platforms from T-90s tanks to MIGs to Sukhois to Brahmos and Aircraft carriers yet the same has been going through a rough patch more so after the disintegration of Soviet Union. It is worth pointing that various Soviet defence systems part of the Indian arm forces were serviced and repaired in former Soviet countries like Ukraine and with Ukrainian conflict on the rise, the prospect of timely repairs is a serious question. India recently sent its 5 Soviet Era AN-32 military transport aircrafts to Ukraine for repairs only to find the planes to be not traceable by Ukrainian Government. Apart from issues of spares and maintenance in the Soviet Era weapon systems, India has also been facing problems with Russian military industrial complex regarding escalated costs amid delayed deliveries. The most notable case being of the Admiral Gorshkov and associated Mig 29 Fighters. The price agreed for by India for this refurbished aircraft carrier in 2004 was $1.5 billion which was subsequently escalated to $2.9 billion with the delivery schedule being put off by years due to refurbishment delays. The case with Sukhoi SU-30 Al-31 engines is no different that faced mid-air failures are leading to constant complaints by India to Russia to repair/correct the flaw in the core component of Sukhoi’s engines. The 2 factors as stated above have compounded in the case of Mig 29/KUB jets for INS Vikramaditya where the jets delivered are of substandard quality and need to be fit with components whose export to Moscow has been barred by the Ukrainian Government, the US & EU in the face of military sanctions owing to the conflict in Ukraine.

Despite the constant troubles in repairs, maintenance and escalated costs; the Indo-Russian defence partnership has largely been the fulcrum of Indian Military acquisitions, an area which now America is eyeing with DTTI and technology, logistics sharing pacts signed with India. President Putin’s visit to India in December 2014 and Indian MoD, commerce minister’s visit to Russia to promote defence agreements, free trade agreements with Eurasian Economic & Custom union have further strengthened and diversified the Indo-Russian relationship. The Indo-Russian relationship till recently for more than half a century was a vendor-vendee relationship with India being a client state constituting the bulk of arms imports from Soviet Russia. The traditional relationship between India-Russia needs to undergo a drastic change from a bulk defence one to a more equitable and paritable one benefiting both countries in terms of trade & commerce along with the defence sector.

Under the PM Modi Administration since May 2014, there has been a constant effort to transform the Indo-Russian relation from client vendor one to a strategic partner in global affairs. India’s rise as one of the largest economies and consumer of energy provides various avenues to diversify this relationship. India‘s oil giants like ONGC Videsh could invest further in Oil/Gas blocks in Siberia like Sakhlain Blocs and even acquire a stake in the sale of Russian Oil giants like ROSNEFT looking for disinvestment post the western sanctions. Russia has also submitted its claim on Oil and Gas-rich Arctic Region to the UN recently opening new avenues for Russian energy market. India’s energy giants should not only look acts as consumers of energy but also become partners with Russia in strategic Oil/Gas projects in the Arctic and Siberian region. Russia’s investments in the nuclear energy sector have been critical for India like supplying nuclear fuel, building nuclear power plants like Kundakulum in Tamil Nadu.

India should also promote the supply of Foodstuffs and agricultural products to Russia in the wake of the EU sanctions on Russia and Russia’s ban on importing foodstuff from EU countries. Indo-Russian trade volume is just $10 billion as per figures of 2013 and constitute only 1% of the Russian imports. The aim between both countries should be to invest more in R&D, trade in various sectors like agriculture, diamonds, pharmaceuticals, defence technologies & aerospace industry. India should further endeavor to conclude the FTA with Russia’s Eurasian Economic Union thereby taking the volume of bilateral trade to $30 billion by 2025. The diversification of Indo-Russian relationship from a bulk a client-vendor relationship to a wholesome strategic partnership essential for both countries to maintain the equilibrium in Asia Pacific with the rise of China in the Far East.

Geopolitics is ever changing, and dynamic and hence Russian-Indian strategic partnership needs to transform from a more regional to a global one focusing on issues that are of importance to both sides. Terrorism is one such issue on which Russia and India need to co-ordinate as both have been victims of radical Islamic terror throughout the last century. India can partner Russia as the largest secular democracy in the world that has shown the capabilities to counter radical Islamic terror threat emanating from the Middle East and Af-Pak region. Russia and India both could work together in the central Asian through bodies like SCO in a region over which Russia holds significant influence. The resource-rich Central Asian states are a prospective theatre of radical Islamists groups and lucrative prey for geopolitical games of global players like the US & the Challengers like China. Russia and India should actively co-operate and coordinate in Afghanistan and Iran by promoting North-South Transit Corridor from Iran-Afghanistan to Central Asian states in Russian underbelly. It is in Russia’s interests to promote India’s role in Central Asia given its long reliable record as a strategic partner unlike deceptive and slimy China that is only seeking to expand its sphere of influence undercutting the Russians while condoning countries like Pakistan and terrorist groups like Afghan Taliban.

While, India and Russia are actively engaged with China in economic trade yet Russia’s dependence on China has quantumly increased after being sanctioned by the US & EU for the Ukrainian conflict. The Russian dependence on Chinese financing of its projects in far east and elsewhere only underscores the point that India must step up the plate and fill the void left by the EU in economics & trade to make Russians less dependent on China. It is essential for Russia & India to both work in tandem to maintain the delicate balance given the rise of the Sino-Pak axis in Asia-Pacific. Russia & India should mutually look to sell arms and weapon systems to countries in South East Asia like Vietnam etc. As the balance of power fluctuates between west and the east. India could further coordinate with Russia in various regions like the Middle East and North Africa region in countries like Syria, Turkey, Israel, Egypt and Libya on dealing with terrorist groups and supply of arms and weapon systems to some of these countries.

While Indo-American Defence partnership may be the need of time given changing dynamics of Asia-Pacific region with the rise of Chinese behemoth in the East, yet Indo-Russian strategic relationship are mutually exclusive and independent of each other. Unlike the Cold War era, India must manage to dehyphenate its embrace of United States from its old friend Russia depending on its national interests. The recent statement of Russian President Vladimir Putin that Indo-US Defence agreements have no effect on Indo-Russian ties only underscores the said point. Russia and India are bound to play a pivotal role in potential conflict zones in the Indo-Pacific region. Hence it is essential for both countries to work together for a better global paradigm. As the world order goes under transition with the rise of new powers in the east staking claim to global hegemony, the India-Russian relationship will undergo a drastic change from merely a client-vendor one to one where both partners work together in a paritable manner in maintaining global equilibrium seeking to create a multipolar world.

The Chaos In Yemen