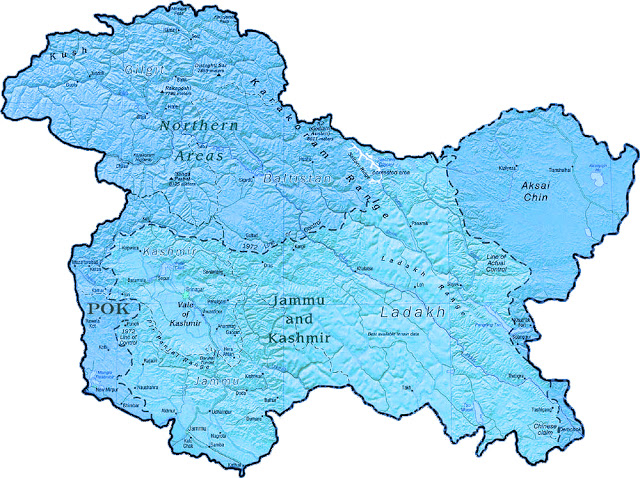 Kashmir is in some ways to India what Taiwan is to China: a peripheral area with an erratic imperial history, with mostly Muslim rulers after the Islamic invasion in India until the Sikhs annexed Kashmir in 1820 from their newly established kingdom in Lahore, now Pakistan, during the decline of the Mughal Empire. Gulab Singh was recognized by the British as a tributary Maharajah by the Treaty of Amritsar in 1846 on payment of 75 Lakh (Rupees 7.5 million). The Qing Emperors Kang Xi and Qian Long had completed Manchu-Chinese control over Tibet in 1720 and Xinjiang in 1760. Now, in the 1840s, this upstart minor ruler Gulab Singh was making inroads into Tibet and Xinjiang, which gave rise to one of the Sino-Indian border disputes, which remains unresolved until the present day. Singh’s dynasty ruled Kashmir as the second largest ‘princely state’ of the British Indian Empire until independence in 1947, when Hari Singh was the reigning Maharajah.

Kashmir combined disparate regions, religions and ethnicities: to the east, Ladakh, an old separate kingdom, its inhabitants practiced Buddhism; to the south, Jammu had a mixed population of Hindus, Muslims and Sikhs; in the heavily populated central Kashmir valley, the population was overwhelmingly Sunni Muslim, but there was also a small but influential Hindu minority, the Kashmiri Brahmins or Pandits. To the north-east, sparsely populated Baltistan had a population ethnically related to Ladakh, but practicing Shia Islam; to the north, also sparsely populated, Gilgit Agency was an area of diverse, mostly Shia groups; and, to the west, Punch was Muslim, but of different ethnicity than the Kashmir valley.
At the conclusion of British rule and the subsequent partition of the British Empire into the newly independent Union of India and the Dominion of Pakistan, both countries had agreed that the rulers of princely states would be given the right to opt for either Pakistan or India or – in special cases – to remain independent. In 1947, Kashmir’s population was 77 per cent Muslim and it shared a boundary with Pakistan. For the Pakistani elite, gaining Kashmir was an issue of vital national identity. They claimed a natural right to all Muslim majority areas. Professor Phuntchok Stobdan, himself a Buddhist from Ladakh and adviser of the Indian government on Kashmiri affairs and border security, describes Pakistan’s national psychology as: ”We Muslims had ruled over the Hindus for more than 500 years – the Delhi Sultanate and the Mughal Empire – until the British came by mid-seventeenth century. Now the British have left, why shouldn’t Muslims rule over Hindus again?” Indeed, it was anticipated that the (Hindu) Maharaja would accede to Pakistan after the British paramountcy ended on 14-15 August 1947. When the Maharaja hesitated and talks dragged on, Pakistan used tribal guerrillas to frighten the ruler into submission. Instead the Maharaja appealed to the former British Viceroy, now Governor-General, Lord Louis Mountbatten for assistance, which he agreed to on the condition that the ruler accedes to India. Once the Maharaja signed the ‘Instrument of Accession’, which included a handwritten clause added by Mountbatten, asking that the wishes of the Kashmiri people be taken into account, Indian soldiers entered Kashmir and drove the Pakistani-sponsored irregulars from all but a small section of the state. India approached the United Nations Security Council for a ceasefire and to mediate. Indian Prime Minister Jawaharlal Nehru promised a ‘Plebiscite under UN supervision’ – which was never held, ostensibly because Pakistan refused to withdraw its troops. In the last days of 1948, a ceasefire was agreed under UN auspices; however, since the plebiscite demanded by the UN was never conducted, relations between India and Pakistan soured, and eventually led to two more wars over Kashmir in 1965 and 1999.
The eastern region of the erstwhile princely state of Kashmir has also been beset with a boundary dispute. In the late nineteenth and early twentieth centuries, some boundary agreements were signed between Great Britain, Afghanistan and Russia over the northern borders of Kashmir, but China never accepted these agreements, and the official Chinese position did not change with the communist takeover in 1949. China obviously did not make a stand on the first Indo-Pakistani Kashmir War in 1947, simply because it was in the middle of its own civil war. After 1949 the PRC adopted a neutral stance on Kashmir in the years prior to the breakdown in Sino-Indian relations.
By the mid-1950s the Chinese army had entered the north-east portion of Ladakh. In 1957 the People’s Liberation Army completed a military road through the Aksai Chin area to provide better communication between Xinjiang and western Tibet. India’s belated discovery of this road led to border clashes between the two countries that culminated in the Sino-Indian war of October 1962. China has occupied Aksai Chin since 1962 and, in addition, an adjoining region, the Trans-Karakoram Tract, was ceded by Pakistan to China in 1965. India controls 101,387 square kilometers of the disputed territory of Kashmir, but the Indian sector includes the most important part – the Kashmir Valley – and this is the real source of the problem. Pakistan holds 85,846 square kilometers and China 42,555 square kilometers.