Today, China’s primary interest in its relationship with Pakistan is, as Stephen Cohen puts it, to pursue a “classic balance of power strategy,” using Pakistan to confront India with the possibility of a two-front war. Sino-Indian relations were not always hostile. At the time of their founding in 1948 and 1949, respectively, the Indian and Chinese governments declared a post colonial brotherhood. But when China conquered Tibet in 1950, China and India suddenly shared an un-demarcated border stretching 2,500 miles. To this day, Indian and Chinese maps of their border do not match. As a result, some 400,000 square miles of disputed territory exists between China and  India concentrated in two places: the Aksai Chin Plateau, which China controls but India claims, and Arunachal Pradesh, an Indian state that China calls “South Tibet.” In 1962, the two sides fought a war in which Chinese forces expelled the Indian army from both of the disputed territories before withdrawing back to their original positions in China.

After the war, India intensified its economic and security relationship with the Soviet Union, which itself had severed ties with China in 1961. Soon Moscow was supplying roughly three-quarters of India’s imported military equipment. Fearing Soviet-sponsored encirclement, China turned to Pakistan. In 1963, the two sides signed a border agreement that transferred 2,000 square miles of territory in Pakistan held Kashmir to China, and China began selling weapons to Pakistan, a practice that continues today. Between 1978 and 2012, China sold roughly $8 billion in military equipment to Pakistan, typically accounting for 43 percent of Pakistan’s total arms purchases in any given year. China also helped build two nuclear power plants in Pakistan in the 1990s and signed a deal in 2009 to build two more.
In recent years, tensions between India and China have flared. In 2006, China’s ambassador to India declared, “the whole state of Arunachal Pradesh is Chinese territory, we are claiming all of that. That is our position.” India responded by declaring Jammu and Kashmir and Arunachal Pradesh to be “core interests” and deploying two additional army mountain divisions to the northeastern state of Assam, directly below Arunachal Pradesh, bringing India’s troop levels in the region to more than 100,000. China then attempted to block a $2.9 billion loan from the Asian Development Bank for projects in Arunachal Pradesh and began issuing visas to Indian residents of Jammu and Kashmir on a separate paper stapled to their passports, instead of the customary stamping. In August 2010, China denied a visa to the head of the Indian delegation to the 4th China-India defense dialogue, Lt. Gen. B.S. Jaswal, because he commanded forces in the “disputed area” of Arunachal Pradesh. In response, India cancelled defense exchanges with China.
Many analysts believe such tensions, along with growing US-Indian ties, cement an already robust China-Pakistan alliance. This view, however, over estimates the strength of the China-Pakistan partnership during the Cold War, and underestimates how changes since the end of the Cold War have diluted China’s interest in Pakistan.
During the Cold War, China sold arms to Pakistan but never guaranteed its security. In both the 1965 and 1971 India-Pakistan wars, Chinese leaders condemned Indian aggression and funneled military and economic aid to Pakistan, but explicitly rejected Pakistani requests for direct military assistance. In 1971, Chinese leaders watched as India literally tore Pakistan apart, lopping off East Pakistan and turning it into the independent state of Bangladesh.
This experience set the tone for the Sino-Pakistani relationship today: China provides Pakistan with diplomatic support and military hardware, but not protection. The China-Pakistan relationship therefore has never been an alliance, but rather a “subtle partnership” in which China does “the minimum necessary to preserve Pakistani security from a distance but seeks to avoid all overt entanglements in Islamabad’s challenges to Indian primacy in South Asia.”
Since the end of the Cold War, two developments have increased China’s security vis-à-vis India, and therefore reduced China’s interest in cooperation with Pakistan. First, the collapse of the Soviet Union eliminated the primary threat to China’s security and deprived India of its superpower patron. In 1988, Indian Prime Minister Rajiv Gandhi traveled to Beijing, reiterated India’s recognition of Chinese sovereignty over Tibet, and agreed to establish a working group to settle the border issue. In 1993 and 1996, the two sides signed agreements pledging to maintain peace and restrict military activities in the border regions.
Second, China has significantly increased its national power relative to India over the last two decades. In 1990, the size of China’s gross domestic product (GDP) was roughly equivalent to India’s; today it is nearly four times the size of India’s. At the end of the Cold War, China’s military budget was slightly smaller than India’s; now it is over three times as big. In the 1980s and 1990s, successive Indian administrations supported the development of India’s nuclear program culminating in nuclear tests in 1998. But India’s fledgling nuclear arsenal remains so small that, according to Ashley Tellis, “China does not have to take special measures to counter India’s incipient efforts at developing a minimum deterrent.” Indeed, Chinese leaders were more concerned about the anti-China justification of the 1998 tests than the tests themselves. Today, the conventional wisdom among Chinese analysts is that “India’s aggregate strength is not sufficient for a contest with China.” China, therefore, can “be patient at the negotiating table because time is on China’s side.” 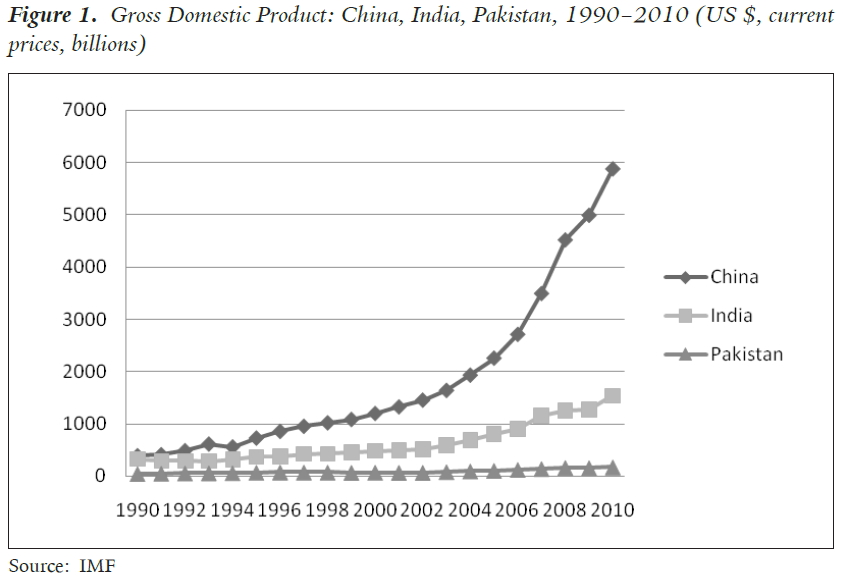 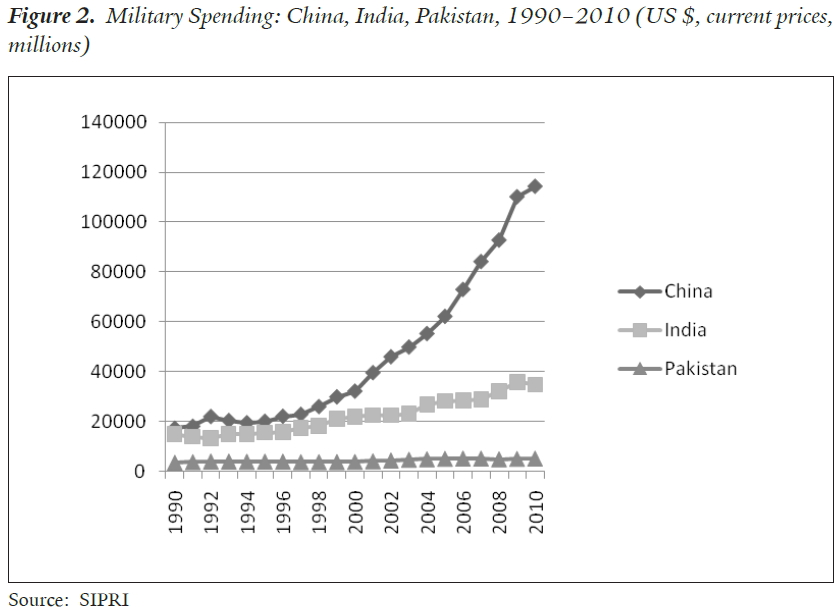 Qualitative assessments of Chinese and Indian military forces in their border region provide additional evidence that China faces a smaller military threat from India than at any time in its history. While India fields 100,000 troops armed with artillery and protected by two squadrons of SU-30 MKI (Flanker-H) fighter jets based in Arunachal Pradesh, China maintains 400,000 troops and five airfields in the military regions surrounding the border (Chengdu and Lanzhou) and has constructed a long-distance rail link between Beijing and Tibet that can be used to move additional units to the border. More important, Chinese soldiers sit atop the Tibetan plateau while Indian units are located in the valleys below the Himalayas, a position that exposes them to Chinese fire and impedes counter-attacks. In 1962, China expelled the Indian military from Aksai Chin and Arunachal Pradesh in less than a month, including a two-week diplomatic cease-fire. Today, according to one assessment, China’s modern “rapid reaction forces” could take the same territory in forty-eight hours.
To be sure, such calculations are speculative. But China would have a geographic advantage even in the event of a protracted border war. Indian territory around Arunachal Pradesh is squeezed between China in the north and Myanmar, a Chinese client-state, in the south. India spoiled its relationship with Myanmar’s military regime in 1988 by supporting the opposition pro democracy movement. China, by contrast, is Myanmar’s main arms supplier and diplomatic supporter. If another border war erupted between China and India, Myanmar might not open up a second front against India, but it might provide a staging point and base camp for Chinese forces.
None of this is to say that China no longer needs Pakistan to balance India. Pakistan’s strategic importance to China, however, has likely receded as China’s position vis-à-vis India has become more secure. Recent polls show that 60 percent of Chinese citizens see no threat from India and the Chinese government, according to Even Feigenbaum, “considers India a third-tier security priority at best far behind internal insecurity and challenges in the East Asian Littoral.”
In fact, India is becoming an economic asset to China. China’s trade with India now dwarfs that with Pakistan. Moreover, the composition of China-India trade is favorable to China: 70 percent of China’s imports from India are raw materials whereas the majority of China’s exports to India are manufactured goods. This situation supports employment and profits in China and helps Chinese manufacturers move up the value chain faster than their Indian competitors. 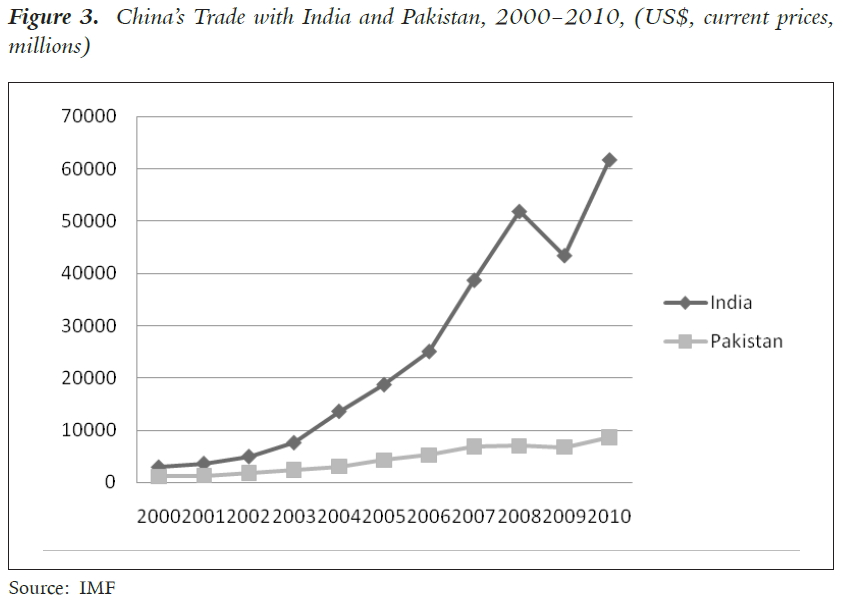 Economic interdependence may not preclude conflict between China and India, but the evolution of China’s position on Kashmir suggests that economic interests have dampened historical rivalries. In 1990, after a re-escalation of tensions between India and Pakistan, China withdrew its support for a United Nations plebiscite on Kashmir. This amounted to an implicit endorsement of India’s position that the conflict should be resolved bilaterally. During the Kargil War in 1999, in which Pakistani soldiers infiltrated Indian-Kashmir, Chinese leaders remained neutral and rejected requests for support from Pakistani leaders.
Of course, the thaw in China-India relations will not stop China from selling arms to Pakistan. If China were to cut off these arms sales, it would not only lose an important source of income, but also allow India to redirect some of its forces from the  its border with Pakistan to its border with China. Thus, China will likely continue to prop up Pakistan as a viable counterweight to India. But China’s interests in Pakistan do not extend far beyond this basic goal, whereas China’s interests in India have been expanding rapidly in scope.
Some analysts believe that China will respond to India’s partnership with the United States by tightening its relationship with Pakistan. For now, however, Chinese analysts seem confident that India “will come into conflict with the United States over its many interests” and that US-Indian cooperation will remain limited for the foreseeable future. Indeed, during his first visit to China in November 2009, President Obama declared that the United States and China would “work together to promote peace, stability, and development” in South Asia. This statement was widely interpreted by Indian leaders as an invitation to China to meddle in India’s backyard. According to the former Indian foreign secretary and the than ambassador to the United States, Lalit Mansingh:
“There is a feeling that in Obama’s international calculations, India is not that important. The suspicion is building up that Obama is not as keen on the strategic partnership with India as George W. Bush was. There is, underneath the surface, a suspicion that the Americans are scared or too dependent on the Chinese.”
India, for its part, has opposed the United States on climate and trade initiatives, failed to enact liability legislation needed for American companies to develop India’s nuclear industry, and rejected US bids to sell India 126 multi role combat aircraft at a price of $10-$12 billion. A growing number of American analysts now say that “the refrain in Washington is that the Bush administration oversold the potential for strategic partnership with New Delhi,” and that “the Indo-US of the future will remain just that for quite some time  much of the partnership remains inspirational.” The same could be said of the Sino-Pakistani partnership.