Home ASEAN “India & China” – So Similar yet so different
Facebook
Twitter
Google+
Pinterest
WhatsApp
Linkedin
Email
Print
Telegram
India and China are two vast economic systems, both containing a number of distinct economic sub-systems and disparate regions, as a result of the diversity of social culture, geographic terrain and climate, and structure of economic activity.  In India, while Hindi speakers represent 30% of the population, there are fourteen other official languages.  In China, while Mandarin speakers are 53% of the population (in the cities the figure is two-thirds), 86% of the population also speak regional Chinese dialects.
Within a global context, India and China are often considered in the same breath. But while there are similarities, there are also significant differences.
Similarities
The first point of similarity is that both countries are very ancient societies, with deeprooted and complex cultural traditions that extend back for thousands of years.  While the histories of both countries have been characterized by extensive international involvement, there have also been periods of relative isolation.
The politics of both modern states were forged by events in the 1930s through to the late 1940s.  1947 saw the creation of the modern state of India, following the post independence partition of the sub-continent.  India has never accepted partition, nor the partition of Kashmir, but remains largely passive in relations outside the subcontinent.
In China, 1948 marked the year of the Communist takeover of the country and the defeat by Mao Tse-tung of the nationalist forces of Chiang Kai-chek, who fled to Taiwan.  China has been aggressive in Tibet (1948) and Korea (1951) and has had border clashes with India and Vietnam.  It maintains its claim of sovereignty over Taiwan, and its potential for aggression is supported by the largest military machine in Asia.
In physical terms, each country occupies a vast landmass, with a population of 1.1 billion (India) and 1.3 billion (China).  China’s income level places it as a lower middle income country; India a low income. The size of the population and the rise of a middle class in both countries, however, presents large target markets for symbols of affluence.
As Figure 1 highlights, both countries have a lower rate of urbanisation than would be expected for their national income level, although this is more pronounced in India, which has encouraged people to stay in rural areas.  The sheer scale of both countries masks huge internal regional differences, as a result of geographical distance, topography and way of life.  In economic terms, both countries have a large agricultural sector, although this has declined steadily over recent decades, and at a faster rate in China, as shown in Figure 1.  The under-development of the rural areas of both India and China can only be rectified by investment and education. Some limited success has been achieved through the local use of micro-credit in India, but greater scale is needed if economic progress beyond survival is to be achieved.
China has to date not discouraged the flow of migrant workers from the countryside to seek better fortunes in the cities.  There is, however, now discussion as to whether more rural support should be put in place to reduce the rural-urban disparities, which could be a source of further social tension.  The fact that China experienced some 87,000 riots in 2005 underlines the need for action to improve rural life compared with that which city dwellers are reported to enjoy.
Figure -1. The move to the cities 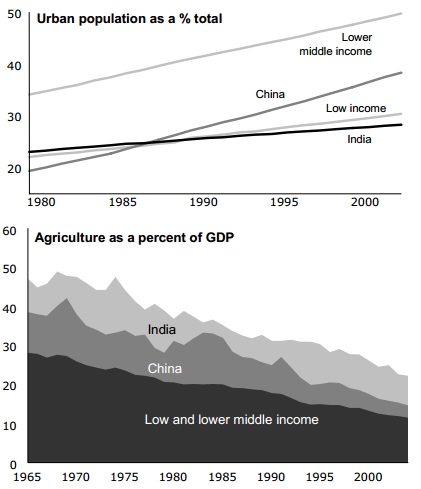 As might be expected from the continued significant role of agriculture in India, India’s manufacturing value-add as a percentage of GDP remains below the level typical for a lower or lower middle income country. China’s level of manufacturing value-add is higher than the typical lower or middle income country, as can be seen in Figure 2.
Both countries have experienced healthy rates of economic expansion over the past two decades, with China having grown at a somewhat faster rate.  While economists have cast some doubt as to the reliability of Chinese GNP statistics, the overall picture is clear and even accentuated by the recent recognition and enumeration of the size of the services sector in China.
Figure 2: China focuses on manufacturing 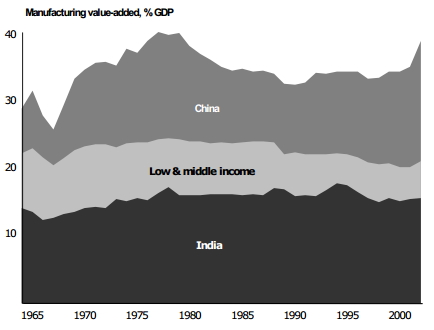 Figure 2 indicates that the share of manufacturing in China’s GDP has remained stable.  This needs to be viewed alongside the growth in GDP for China and India since 1975, as shown in Figure 3.  The figure emphasises that the manufacturing sector in China, in absolute terms, has risen at a very rapid rate, even if stable as a share of GDP, given the estimated growth in GDP.
Figure 3: GDP growth for China and India 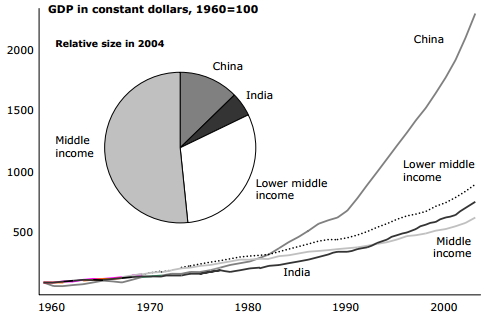 The pie-chart in Figure 3 also shows the relative size of the economies of China and India in 2004, as a share of the total for all 94 middle income and 59 lower middle income countries.  It highlights that China’s GDP was considerably larger than India’s in 2004.
India and China both present various problems to western businesses undertaking transactions in those countries.  As Figure 4 indicates, corruption is seen as one of the constraints in both countries.  Similarly, managers in both countries report that they spend between 15% and 20% of their time dealing with officials.  The Court system in India is also widely viewed as a problem.  Further, it should be noted that labour skill shortages are highlighted by western businesses as a constraint on operations in China.
Figure 4: Doing business in India and China 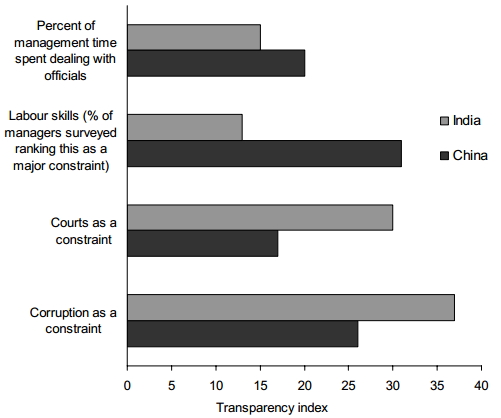 The internationally respected “Transparency Index” shown in Figure 5 illustrates the connection between this index and the average income in a range of countries.  India and China are on the virtual trend line, but at a relatively low level in terms of both income per capita and transparency.  This suggests that unless transparency is increased in China and India, the growth enjoyed to date will be difficult to sustain.
Figure 5: Transparency and income 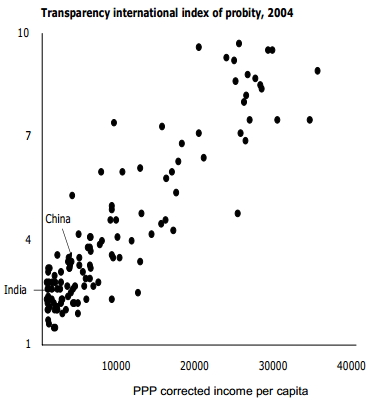 Differences
While the similarities between China and India are broad, the differences are quite deep.  Fundamentally, the stark difference being that China is a communist system, whereas India is a democracy.
China’s communist system has left a deep legacy of SOEs, with the state having a strong hand in major sectors of the economy.  The Communist Party dominates the governance of most aspects of Chinese life.  English is not widely spoken, although growing among the young.
India’s economy has been basically liberal, despite there having been much state intervention in the post-war period, which is now being rolled back.  In practical business terms, India is largely Anglophone commercially, with legal and governance systems akin to the UK.  English is widely spoken, although literacy in general is lower in India than in China due to differences in policy and in expenditure.  China has invested in universal primary education and is now turning its attention to secondary and tertiary education.  India is yet to address universal primary education but does possess some world class universities.
China’s one-child policy has produced a relatively ageing population, whereas India has a much younger and faster growing population profile.  Further, the behaviour of the diaspora differs between India and China.  Until recently the Indian diaspora has tended to invest off-shore, for example, in the Middle East rather than in India.  The Chinese diaspora, including Taiwan, has been active in investing in the growth of the private sector in China.
Figure 6: China has a high rate of savings 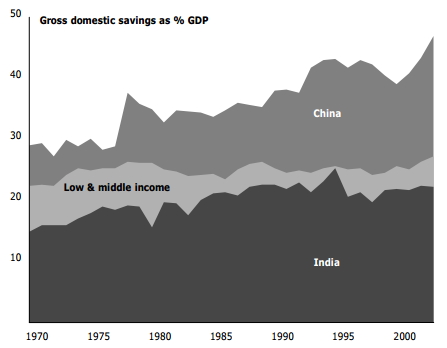 Figure 5 compares the position of the two countries as regards savings.  China has a significantly higher level of domestic savings compared both to India and other countries of comparable national income. Similarly, China is far more trade dependent than India, as a result of its rapid manufacturing-driven export expansion over recent years, as shown in Figure 6.
Figure 7: China is more dependent on trade than India 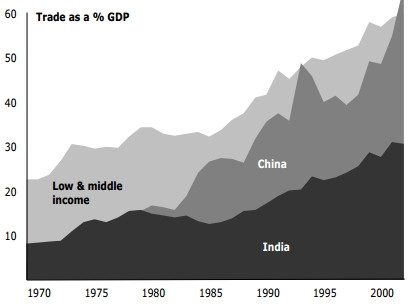 Banking
In terms of the banking sector, India has a more stable banking system.  Banking dates back to 1786, when the first bank was established in India.  The banks were nationalised in 1969 with more recent liberalisation since 1991 and major reform in the financial and banking sector.  There continue to be public and private sector banks, co-operative banks and regional rural banks.  The Reserve Bank of India (RBI) acts to regulate and act as banker to banks and government.  The Industrial Development Bank of India is the tenth largest development bank in the world rankings.
The Chinese banking system is burdened with its links to the SOEs, which are technically bankrupt, but which continue to receive subsidisation.  Although the government has taken steps to reduce the number of SOEs, which effectively have acted as a social security system, the problem is far from fully resolved.  The major banks are heavily overextended by debt, and are regularly re-capitalised by the state. Major banking reform and liberalisation are overdue.
Attitudes to “progress”
Differences in history and social structures have a strong effect on economic prospects.  A recent analysis has examined the value systems of a range of developed and developing countries. The scaling is based on how far attitudes among countries vary in relation to the “distance” on a number of parameters that were assessed for each country, both in terms of objective status (income levels) and prevalent socio-political structure and psyche of the population.  It has found that attitudes towards the future vary widely, as might be expected, where India’s values are very different from China’s.  China is more positive about the future, India is less sure.
Figure 8: Comparing attitudes to “progress” 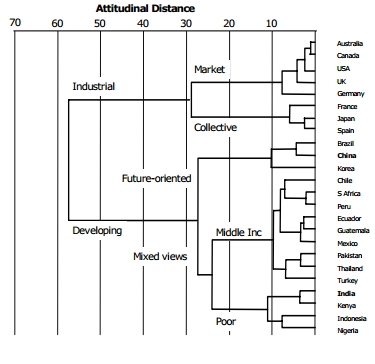 This is reflected in the different challenges in relation to energy and transportation. India has not invested in an infrastructure sufficient to deliver electricity or other forms of energy reliably to many of its people.  Similarly road and rail systems remain a hurdle.  Airports too are a bottleneck: for instance Bangalore’s international airport was conceived in 1993 and work started in 2005. China on the other hand is investing massively in infrastructure, partly as a way of using unskilled labour from the land.  As described in the World Bank literature, “during the past two decades, China has invested heavily in public infrastructure as part of a national poverty alleviation program”.
China also faces enormous challenges from pollution of air, water and land from coal burning, chemicals and other sources.  According to the World Bank, 6 of the 10 most polluted cities in the world are in China.
Education
The two countries have taken a different approach to education.  The expenditure in India is comparable – as a share of GDP – with other low and lower middle income countries, whereas China’s focus on primary education and universal literacy is funded by expenditure amounting proportionately to half that of India.  Both however, spend considerably less than developed countries on education, highlighting the fact that although the number of students from China and India seem large, they represent a smaller proportion of the population than in developed countries.  Of concern to some western economies such as the UK is the projected proportion of people with secondary level education by 2025, as indicated in Figure 9.  Both countries – particularly India – are creating a well-educated labour force with highly trained graduates, which is in itself, is an opportunity and a threat.
Figure 9: Secondary level of education becomes the standard 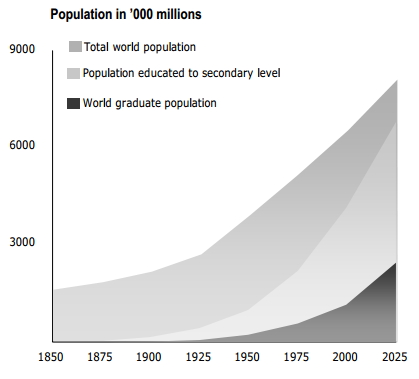